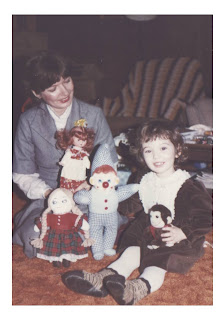 My mother has taken Lithium (off and on) for most of my life. Back in the 1970's she was diagnosed Manic Depressive Disorder, before people really knew enough about the condition, along with its spectrum. She had several psychiatric hospitalizations that I remember when I was a child. I was relocated to live with relatives at different times because of my mothers mental instability.

My uncle has said she was weird as a child. I've come to find out, in her early 20's, that she may have attempted suicide over a boy to whom she was engaged. My mother never married and her relationship with my father will make for many more blog entries.

Mom and I have talked a few times since Christmas. I sent her LeJardin, the only perfume I remember her wearing in the 1980's. Ninety-eight percent of my mothers communication with me is about how sick she is or has been. It's been hot - I've been sick. It's been cold - I've not been feeling well, sorry I haven't called or wrote. She rarely asks about me or my husband - what might be new in our lives? Every time we talk she is sick in some way - this has been going on most of my life. My mother barely got out of bed when I was a child. And, like my mother, I too hide in bed for my own salvation when I'm emotionally challenged. I'm easily addicted to super soft warm flannel, fleece blankets, lofty duvets and pillows of all shapes.

A few years ago she had an emergency hospitalization for a hysterectomy. Then, after some doctor gave her estrogen (not much more than a year later) she had a piece of her breast removed after finding a cancerous lump. I'm under the impression she has had chemotherapy and some radiation treatment with each of these illnesses. On the one occasion, the only reason I knew of her illness, was from the hospitals call to me, as next of kin information on her paperwork.

Her attention seeking sickness never went very far. There have been vague instances where she called to tell me she thinks she has Multiple Sclerosis - but doesn't. But mostly, it's hard to tell what is really happening, imagined or partially true. I've had a hard time believing her, especially when she has confused reality with fiction in the past.
With her bouts of cancer, she never voiced concern about treatment - it almost seemed like she was happy. She has found truth with cancer.

Last Sunday afternoon was a call from my mother. I'll be married ten years this May and she only now gets a phone.
She has fluid in her lungs - and is having them drained this Friday along with some biopsies preformed. The doctor is concerned it might be metastasized breast cancer that has spread to her lymph nodes.


Oh, by the way... My landlord just gave my your Christmas card. It had a date on it. Did something happen to Steven's father?

So, when it comes down to it, I'm not really a very good daughter to my mother. I could be nicer... More generous. I kinda gave up some time ago. We don't often have conversations back and forth. Usually its one of us talking - usually my mom. I've tried to help her - When my grandfather died, I tried to get her to use some of the money she had in trust to her towards a ummm... fuckinggoddamn phone. Not another fur coat or something even more absurd. I wanted her to write down her wants and needs, make a list. Think things out rationally, but that was too much to ask.

I'm feeling like - this is it? Really? I know we don't have that loving, conventional relationship that daughters are suppose to have with mothers. Part of me feels like she was taken from me a very long time ago. So, why am I crying? I've cried over my mother for years. Where did this physical pain under my ribs emerge from? This is too soon - I'm not even a mother myself.  Can I even be one? Has her example contaminated me? I've found myself thinking, I don't deserve children. Having her DNA inside of me is what makes me infertile - if I tried harder, maybe I'd get pregnant, but passing my genes on would likely be cruel.

Looking back, I do appreciate she was able to identify her limitations. She legally stepped back from her paternal ownership of me - to let me grow with other people in charge. That cannot be an easy thing for any mother to do.

Emotional and physical abandonment from my mother and father was most likely difficult. I feel processing it, and having to explain my situation to my peers as a child was likely worse. Why do you live with your grandparents? Where is your mother and father? Even now, as an adult, I'm plagued with severe jealousy when I witness healthy, loving, mother/daugher father/daughter relationships.
For many years I've thought, if my mother died when I was young, I could remember her without disappointment - Paint fanciful, mental memories of a great mother who did everything with grace and precision. A woman perfectly balanced - who made an exceptional wife. I'm not saying I wanted my mother to die ever. But, somewhere, in my heart, I've grieved already. And, it feels as if she has died before. The tears I'm spilling right now are of fear - that I've become so cold and bitter inside that when I tell her I love her over the phone - I don't really mean it anymore.
Posted by Poor Ophelia at 2/12/2010 No comments:

To read or not to read

Therapy I've paid for among other things